Yalla Shoot is not available legally 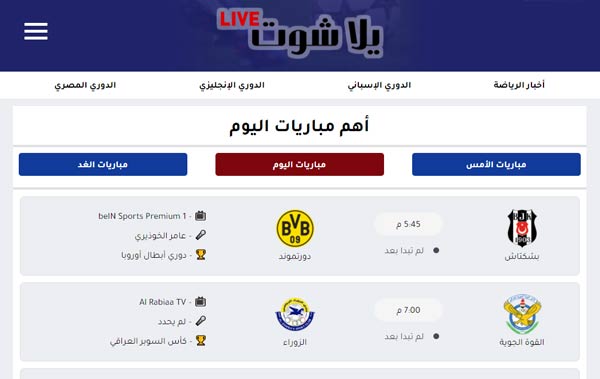 Yalla Shoot.com is a free streaming website that operates illegally across the middle east and worldwide - Pay-per-view TV broadcasters such as Sky or beIN Sports pay huge amounts of money for the live broadcast rights to show Live Football, such as the EPL Premier League.

Users of Yalla Shoot or other live streams should be aware that accessing these live streams are acting illegally and could face prosecution if they are caught downloading and watching copyrighted material.

Is there an alternative to Yalla Shoot?

We would strongly recommend that you watch live sport (in the UK) via an official Sky Sports subscription, which allows fans to watch all Sky Sports football channels (such as Sky Sports Main Event, Sky Sports Premier League, Sky Sports Football).

What Live Football is currently available on TV right now?

Use our Match schedule links below to find out what upcoming football is being broadcast on TV and via official streams: