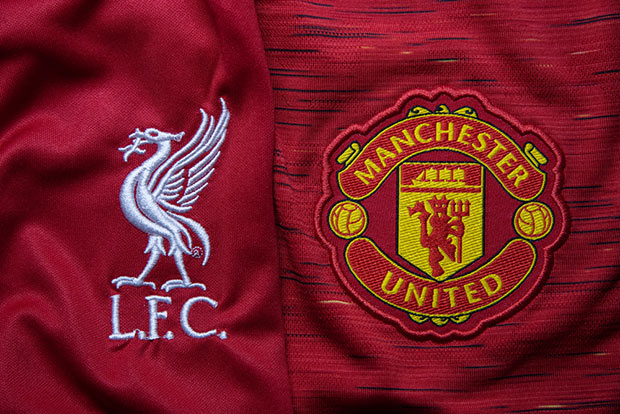 In recent seasons Liverpool v Manchester United has not been as hot blooded as it should, with United playing catch up on Jurgen Klopp's title winning side.  However, this weekend's match is one of the most eagerly anticipated derby games as both sit in the top two spots of the table.

Current league leaders Manchester United are on a great run of form and are looking for a first win at Anfield since 2016.  Unbeaten in the last 11 Premier League fixtures, they've taken 29 out of a possible 33 points which has surged them up the league ladder.

Liverpool, on the other hand have been stuttering of late, with their worse run for many months and without a league win in the last 3 games.

As always, bragging rights will be at the top of the agenda for this match, but Reds' manager Jurgen Klopp will be hoping a win against their arch-rivals will give his team some much needed momentum as we approach the business end of the season.

WherestheMatch.com has all the info you need on how to watch Liverpool v Man U on UK TV and via live streaming.

When is Liverpool v Man Utd on TV?

What time is kick-off?

What TV channel is Liverpool v Man Utd on?

You can watch the game live on Sky Sports Premier League and Main Event from 4pm.  It's also available in Ultra HD.

You can purchase a NOW TV Sky Sports pass for £9.99, or watch on Sky Go if you have a Sky subscription.

Liverpool - Van Dijk, Tsimikas, Gomez and Jota are all sidelined with injury.  The Reds' may have Keita and Matip back for availability.  Firminho is likely to be picked ove Minamino following his FA Cup appearance.  Alcantara is also likely to make the starting XI.

Man U - Pogba has seemingly shrugged off any doubt of injury following a goal and full 90 minutes outing again Burnley.  Rojo and Jones are still out injured.  Manager Ole Gunnar Solskjaer will likely start with Cavani, Rashford, Fernandes and Martial for fire power up front.

Despite Man Utd being in red hot form at the moment, Liverpool have had a well earned rest this week and should be fully charged for this encounter - it also means Klopp can field his strongest team without needing to rotate.

The midfield battle between Thiago and Fernandes will be crucial and may well be determining factor in service to the front men.

The easy prediction would be that they cancel each other out and settle for a draw but we think a few days rest will see Liverpool go all guns blazing for the win and the bragging rights.

For the complete list of what games are coming up check out our Premier League fixtures on TV guide.