We've taken some time out of our busy scheduling to review one of the oldest streaming sites on the internet, Cricfree. As far as we remember, Cricfree was one of the first of it's kind to enter the world of live sports streams and it still exists today.

What exactly is CricFree?

Cricfree (originally designed for Cricket lovers, hence the name "cric") is one of the oldest and widely regarded free live streaming platforms out there. It provides an abundance of live streams across many worldwide broadcasters, sports and channels for most sports you can think of - most of it's traffic inevitably comes from Football fans scrambling to watch live Premier League, La Liga, Bundesliga and other European football but Cricfree also offers live streaming of many American sports including NFL, NBA and MLB.

Why use Cricfree and not go via legal streams?

There is a clue in the title, Cricfree streams are completely free! They supply users with live streaming links to external sources found across the web - but (and it's a big but), you should be very careful when clicking around the Cricfree site as it is full of malvertising (the type of pop-ups that could seriously cause damage to your device). One of the better elements to Cricfree is their long-standing chat room that allows you to chat to same-minded sports fans who are also there for the same reason, to watch live sport! 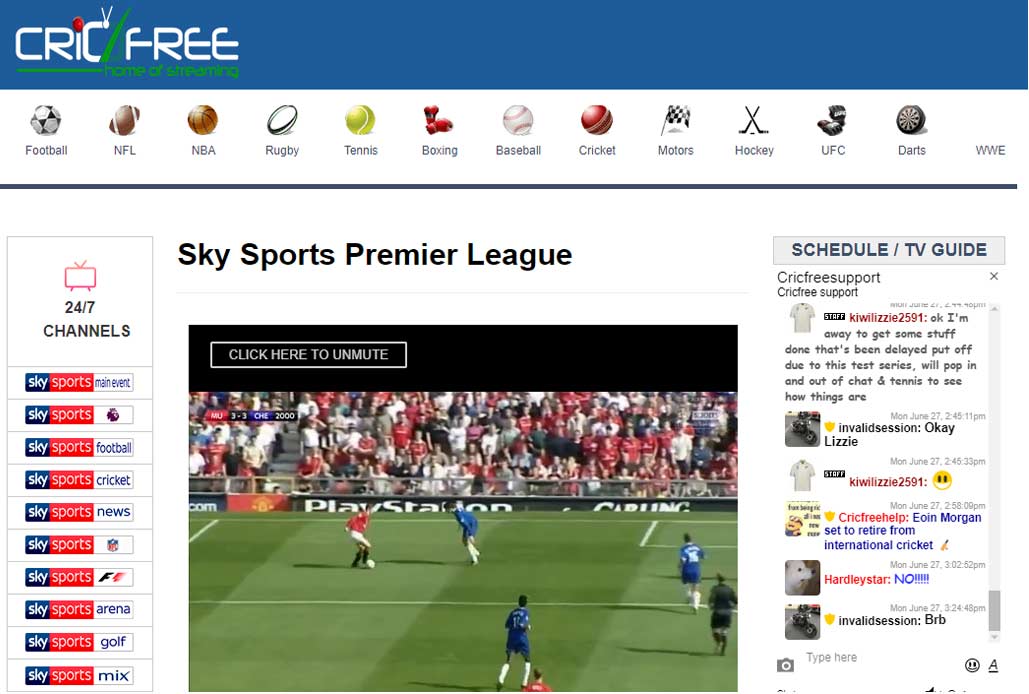 Back in the day, Cricfree was "the" goto platform for all things live sport streaming - however, this industry has grown like a beast and unfortunately Cricfree now shares it's traffic with thousands of other streaming sites who are looking to make a quick buck out of sports fans trying to avoid paying.

According to SimilarWeb (a great little marketing tool to spy on website competition) Cricfree has many versions, but more recently cricfree.io boasted 1.8 million monthly users and cricfree.live 2.1 million. Other domains such as cricfree.be has in excess of 100,000 monthly visitors. During the off-season, these numbers drop dramatically whilst the football season takes a summer break, but this will soon change come the start of the new domestic season.

Historically aimed at Cricket fans, Cricfree covered international cricket during the early 2000's but this quickly changed as they saw a huge opportunity to grow their number of sports offerings. Today, they now cover as many sports as we do for scheduling. Infact, Cricfree tried to partner with WherestheMatch.com as they wanted to use our schedules to add to their streams - obviously we distanced ourselves as we are strictly above board and legal and have no association with copyrighted streams.

How does Cricfree make it's money?

You might notice that Cricfree has cleaned it's pages of adverts from it's interface, so you could wonder why and how they bother offering free streams for free without asking for some money in return. One word, malvertising. In the live streaming world, this is the black art of sending many of it's users to pop-up pages that appear to look like a free stream registration or install, but infact users are giving away their personal information or signing up to a useless piece of software that leads to a black hole but makes Cricfree a few pennies. When you have repeated this process a few times you eventually land on the live video to watch the stream, but probably at a cost to your machine which will no doubt be infected.

Cricfree - full of copyrighted streams but is the user acting illegally by watching?

So you've jumped through hoops to finally get to a live stream of your favourite match on Cricfree, but have you thought whether your actions are above board? Most users looking for free streams are fully aware that Cricfree is not a legal platform (the likes of Sky and BT are constantly hunting them to shut their streams down) but most are unaware that watching live streams that are owned by these broadcasters are also acting illegally and could find themselves hit with a hefty fine or worse!

Do users know about the brand cricfree or do they rely on Google searches?

If you're a hardcore live streamer, you'll have already heard of the name Cricfree - however this doesn't mean you'll find their current domain. One of the main problems Cricfree faces is being shut down, and this usually means getting removed from Google's search engine. When this happens, Cricfree clone their domain so that they can re-enter the Google rankings - most users punch "Cricfree" into Google in order to find their latest domain name, which at the moment (in 2023) is cricfree.io and cricfree.be.

You won't be bowled over by the design as there is nothing out of the ordinary - a list of sports in the header, and a schedule of fixtures and matches below it with a call to action button to the main stream page (not dis-similar to WherestheMatch!). The quality of the design is not the priority for the owners of Cricfree, infact you could argue that if a live streaming website was too polished that it might seem to be legitimate and require payment for access. By drumming down the design, users recognise that it is probably offers free (and obviously illegal) streams.

The navigation of Cricfree shows a list of TV channels / broacasters down the left hand side should you know which channel (Sky, BT, ESPN, Fox, beIN Sports to name a few) a particular match is being shown on, or a list of leagues (such as the EPL, UEFA Champions League, FA Cup, EFL, Serie A, Bundesliga, Lique 1 etc).

Next to the main schedules in the centre is their famous Chat room to the right hand side (on desktop) which is where Cricfree try to keep users on the website and chatting about stream quality amongst other things. A chat room by design can help keep users on site for longer, which in turn reduces bounce rate on a website. Google loves a site with low bounce rate and therefore gives it more points for ranking high on their search engine.

Down at the bottom of Cricfree is nothing special but as like many live streaming sites, a big fat disclaimer informing users (and the law) that they don't host the live streams and that "This site is not responsible for the legality of the content. For legal issues, please contact appropriate media file owners/hosters." This is usually ignored by broadcasters seeking shut down, which is why Cricfree has moved domains so many times.

Having browsed for a time, we actually found it very difficult to get to a stream without hitting many brick walls and pop-ups. When we did finally get to a video player of a live football match, we were then faced with more video registrations / forced installs in order to see the live video that was hiding behind it. Not a good experience at all, particularly if you are trying to watch right now!

Does Cricfree cater for a UK audience?

We've done a review based on being a user in any country, but WherestheMatch is interested in how it caters for a UK audience since we are UK based. Content on the Cricfree is based around Football predominantly so it is therefore no surprise that the English Premier League takes centre stage in terms of its first few links on the homepage. In addition to this, the channel list that Cricfree provide (including real logos) start with UK pay per view providers Sky Sports, BT Sport, Premier Sports, Eurosport and BBC so UK viewers are well taken care of.

We browsed on both platforms but most users will be viewing on mobile so we'll talk about this here - the good news is that screen estate means they trim a lot of the fluff (chat room, peripheral links) so that you can get to the main live streams quicker - however, due to the malvertising on the site, you will regularly be sent to mobile type pop ups which include links over to apps on iOS devices which take you out of Safari or Chrome on your smartphone, which is obviously very annoying.

The obvious benefits to using Cricfree on a desktop is the size of the video stream, which is naturally bigger than your mobile.

Our verdict on using Cricfree

If you are a regular browser of streaming sites, you will be used to the intrusive nature of how they make their money. However, if you are a first timer at watching illegal streams (which we do NOT advocate), then you should avoid this one. It will give you virus anxiety and you'll be looking to load up your Anti-virus software to run a sweep of your device! However, when you do actually get to see a live stream, the quality is actually pretty good.

- Uses malvertising which WILL cause damage
- Takes an age to get through the swamp of browser windows and install requests
- Most streams on Cricfree are illegal, users beware!

As mentioned, Cricfree is not the only live streamer on the web - if you want to sleep easy at night, we suggest you use the legal links below to the official broadcasters for your fix of live sport. If you are a risk taker, check out some of the biggest live streaming alternatives to Cricfree currently avoiding the eyes of the law. We at WherestheMatch.com believe you pay for what you get, so we would always advise you to go legal via the official TV rights holders!