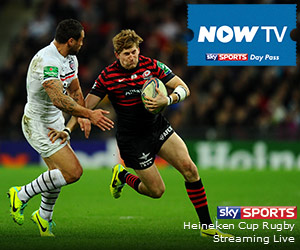 Sky Sports have exclusive TV broadcast rights to many Rugby Union league competitions for the 2020/21 season including the Gallagher Premiership, Championship Rugby, Guinness Pro14 and Warm up matches leading up to the Rugby World Cup.

Rugby Union on Sky Sports is available in UltraHD, and some matches are shown on Sky's Red button service, particularly when the Heineken Cup is playing across Europe.

DISCLAIMER: WherestheMatch.com holds no responsibility for any match information that is incorrect. Whilst we do our very best to make sure our Rugby TV Schedules are accurate, users should always check with the official broadcaster for confirmation of the upcoming live match.