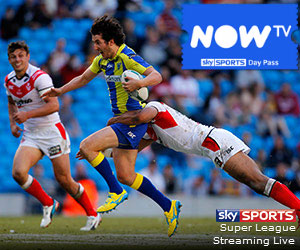 Rugby League on Sky Sports Tonight, Tomorrow and this weekend

Sky Sports has been the home of Rugby League since 1996 when Super League was first introduced in the UK. With complete TV broadcasting exclusivity, Sky Sports has at least 2 live Super League matches every week for the 2020 season (usually on a Friday night at 8pm and on a Saturday evening at 6pm). Sky Sports tries to show most clubs evenly over the course of the season, but they usually show the top 6 teams Wigan, Warrington, St Helens, Leeds, Castleford and Huddersfield more often.

Sky Sports also has every Super League Play off game live on TV, including the Grand Final exclusively from Old Trafford.

DISCLAIMER: WherestheMatch.com holds no responsibility for any match information that is incorrect. Whilst we do our very best to make sure our TV Schedules are accurate, users should always check with the official broadcaster for confirmation of the upcoming live match.